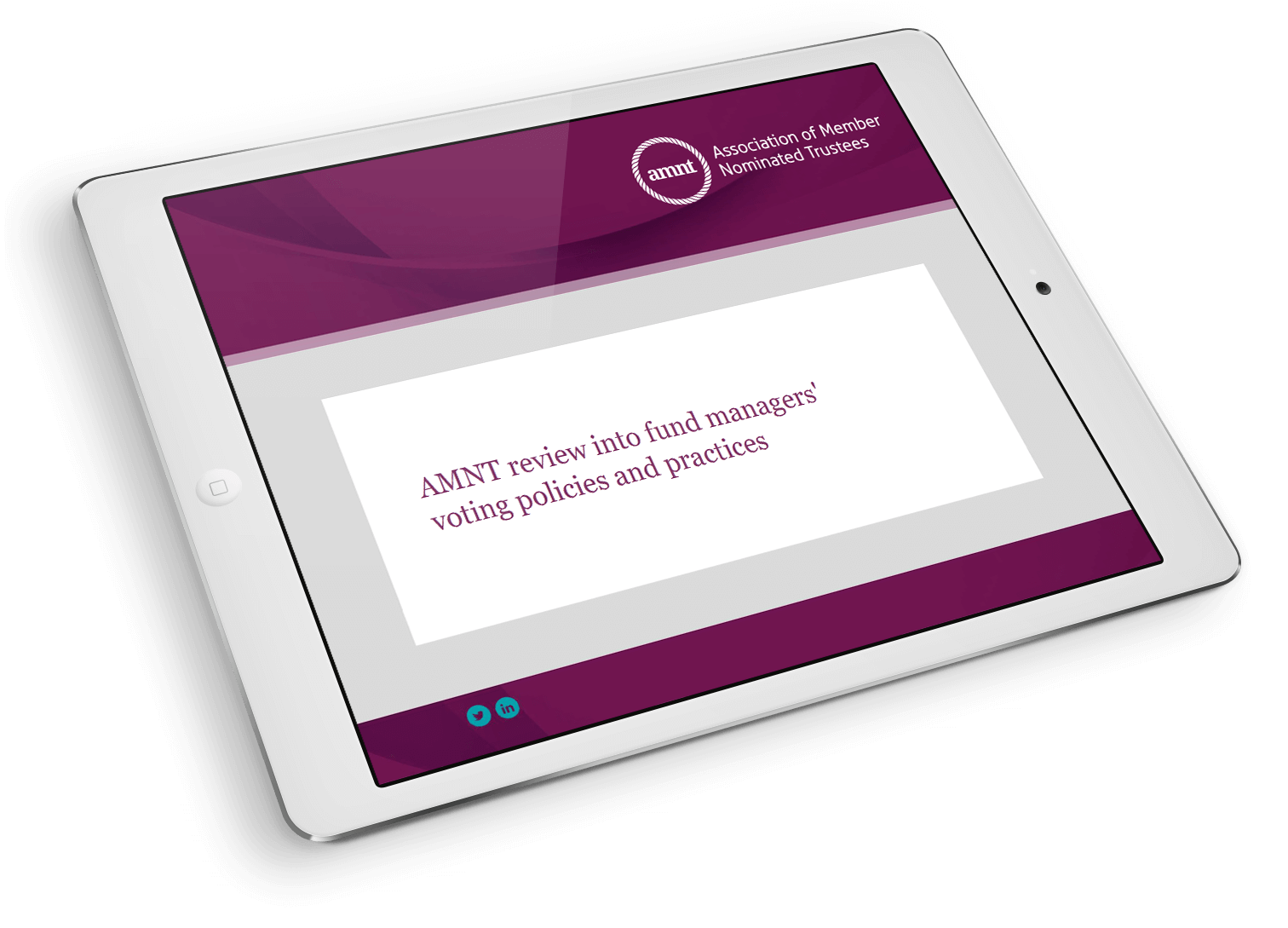 The research was prompted by the continued unwillingness of fund managers to accept client-directed voting in pooled fund arrangements - most notably the AMNT’s Red Line Voting policies which were launched at the end of 2015. The report’s analysis was therefore centred around concerns representing the three ESG pillars of the AMNT’s Red Line Voting policies; namely climate change, gender and ethnic diversity, and excessive pay.

The key findings of the report are as follows:

Our review demonstrates that there is no real market in voting policy due to insufficient transparency.  Too many fund managers' public policies are, in the areas studied, out of alignment with either best practice or asset owners' and societal concerns.  A significant number of fund managers are not prepared to publicly state either what their voting policy and/or guideline is.  We believe the amount of flexibility being used as an excuse for the lack of transparency is not serving clients’ best interests especially in this regulatory environment, and indeed only serves to create doubt as to how serious the fund managers take the issues.

Some fund managers are prepared to provide public reporting after the fact as to what stewardship activities they have undertaken in these areas; however, without the corresponding voting policy or guideline, it is not full transparency and accountability in our view.  And whether they state their voting policy and guidelines or not, too many fail to make their voting records easily accessible. This, coupled with those fund managers that only provide public firm-level (versus mandate specific) reporting to their clients, means that even if trustees attempt to exercise consumer choice and compare fund managers' voting guidelines and records against their own policies, this is not a viable proposition.

AMNT has been told that if trustees do not like the policies pursued by their fund managers they can take their business elsewhere. Our review indicates that there is nowhere else to go.

We recommend that the minimum standards regarding voting policies and practices should at least include:

The AMNT has therefore requested that the FCA takes urgent steps to investigate this market failure and propose remedies that will enable pension scheme trustees to develop their own stewardship policies and their fund managers to accept them including within pooled funds and operate them at the very least on a comply or explain basis.

“It’s utterly unacceptable that most pension fund managers don’t have published policies and practices to combat climate change, and public commitments to tackle excessive pay and promote gender and ethnic diversity are all too rare. Being vague or secretive with the trustees and savers they represent is out of order.  These obstructive fund managers need to take action now as effective and responsible shareholders.”

“More and more pension trustees are trying to develop stewardship policies including for their pooled fund investments, but this study shows the scale of the problem that they have when they attempt to assert their stewardship responsibilities over their investments in pooled funds. We spent two years developing the Red Lines, a voting policy based on nationally or globally adopted principles such as the United Nations Global Compact, and which covers a comprehensive range of environment, social and governance issues including global warming.  But those that adopted the Red Lines as their voting policy were shocked to find that their fund managers would not accept them even on a comply or explain basis.  All but the largest pension schemes are facing an almost blanket refusal by fund managers to accept their voting policies in pooled funds. This means that the fund managers' own policies are the basis on which our shareholder votes are cast at corporate AGMs. The conclusion of our study is that, as things stand, asset owners investing in pooled funds cannot set their own policy and cannot rely on fund managers to reflect it in their policies either. There is no 'market' in voting policies; we have no choice.”

“Asset owners need to be given the right to develop and implement voting policies through its external managers which the new regulatory requirements expect of them. On the one hand, fund managers welcome a more active asset owner community on matters of stewardship, whilst on the other hand appear to want to prevent them from being so. There is a new reality here that I believe the fund management community must come to terms with; they need to modify their business models accordingly in order to accommodate the future client demand that will come from these regulatory developments. The poor transparency and accountability on their own stewardship approach also contravenes requirements from the EU Shareholder Rights Directive, as well as the proposed changes to the FRC’s Stewardship Code. There is a vicious circle here that needs to be broken through increased collaboration between asset owners and their fund managers, in order for us to effectively move forward. Greater transparency and accountability are the first step to achieving this.”

The Association of Member Nominated Trustees (AMNT) is a not-for-profit company limited by guarantee, set up by and for member-nominated trustees, member-nominated directors and employee representatives, of UK based occupational pension schemes in the private and public sector. Set up in 2010, the AMNT has included nearly 800 trustees in its membership, and together these have represented pension schemes with assets under management of around £750 billion, one third of the total UK occupational pensions sector.

The Association is dedicated to providing those Member Nominees (MNs) with support, which underpins their critical role in ensuring that their pension scheme is governed in the best interests of the scheme members in consultation with their sponsors. The AMNT will enable MNs to build their skills and knowledge, voice their opinions, share best practice, become part of a like-minded community and be better recognised for the good and important work they do.

The AMNT has introduced a new approach to responsible investing, Red Line Voting, which enables pension scheme trustees to play a proper stewardship role with regards to the companies in which they invest, including pension schemes investing via pooled funds meet their fiduciary duties in line with the recent guidance from The Pensions Regulator and the Law Commission, It does this by allowing pension schemes to set environmental, social and governance (ESG) voting policies at “best practice” level. For more details, please refer to: http://redlinevoting.org/what-is-red-line-voting/